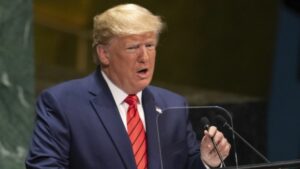 With conflicts raging around the world the UN is finding it increasingly hard to remain relevant.

World leaders gathered at the United Nations General Assembly (UNGA) this week for their annual meeting.

There is much scepticism about whether the UN can still be a forum for change or whether it has become a talking shop.

Conflicts in Yemen, Syria and South Sudan show no sign of stopping, while tensions in the Persian Gulf continue to increase with the US unilaterally abandoning the Iran nuclear deal. US President Donald Trump’s trade wars are also creating a drag on the global economy. And with ongoing climate crises, the UN is seen as increasingly irrelevant in bringing nations together to resolve the most pressing issues of the day.

As the UNGA was preparing to convene, Russia for the 13th time vetoed a resolution on Syria.

Alongside China, Russia blocked a demand by the rest of the Security Council to end the bloodshed in Idlib, which has seen the Assad regime, supported by Moscow and Iran, kill more than 500 civilians since April.

So what will UN member states discuss?

Iran vs the US

The stage was set for a showdown between the Iranian President Hassan Rouhani and Trump at the UNGA.

Both leaders were expected to take the stage and put their version of events forward on who is causing insecurity in the Persian Gulf.

Trump took the podium at the UNGA to announce that “one of the greatest security threats facing peace-loving nations today is the repressive regime in Iran”, words that have pleased Israel and Saudi Arabia.

This month’s attack on oil facilities in Saudi Arabia resulted in the country losing more than half its oil output.

The Houthi rebels in Yemen, which Saudi Arabia has been bombing, claimed credit for the attack; however, Saudi Arabia, the US, Germany, the UK and France have claimed that Iran is behind the attack.

Concrete evidence linking Iran to the attack has not been made public.

Rouhani and Trump were expected to meet at the sidelines of the UNGA; however, it is not yet clear whether this will be possible with both sides aiming to project strength before any future nuclear deal negotiation.

“Nothing is ever off the table completely, but I have no intention of meeting with Iran, and that doesn’t mean it doesn’t happen,” Trump recently said.

Iranian officials for their part have argued that a meeting will only be possible if Trump is ready to exchange sanctions relief for “permanent monitoring of Iranian nuclear facilities”.

French President Emmanual Macron has been shuttling back and forth between Trump and Rouhani in an attempt to broker a possible meeting between the two sides. As yet those efforts appear to have been in vain.

Who won’t be at UNGA?

The UNGA will this year not be graced by embattled Israeli Prime Minister Benjamin Netanyahu, currently fighting for his political life. Neither will Venezuelan President Nicolas Maduro, another leader fighting for internal and international legitimacy, attend the meeting. Russian President Vladimir Putin and Chinese President Xi Jinping will also not be in attendance.

The Emir of Qatar, Sheikh Tamim bin Hamad Al Thani and Turkey’s President Recep Tayyip Erdogan both spoke out against the continuing occupation by Israel of Palestinian land.

Erdogan also spoke about the continuing humanitarian toll the Syrian war has taken on civilians and the pressure it has placed on neighbouring states.

The embattled UK Prime Minister Boris Johnson took the stage at the UNGA to deliver his speech which failed to mention Brexit, instead focusing on the dangers and opportunities offered by Artificial Intelligence and Iran.

Hours before Johnson was about to deliver his speech, the UK Supreme Court delivered a scathing judgment on his decision to suspend parliament for five weeks calling his actions “unlawful”.

Climate activist Greta Thunberg’s rebuke to world leaders at the UN has once again brought much-needed attention to one of the most pressing challenges facing the world that of climate change.

While outside the UN building, there will be protests throughout the week, many will be watching Brazilian President Jair Bolsonaro and Trump and what they say or don’t say.

Bolsonaro has already announced that his speech will be different from the ones delivered in the past, while indigenous Brazilian leaders have called out his “colonialist and ethnocidal” policies.

2,681 Replies to “With conflicts raging around the world the UN is finding it increasingly hard to remain relevant.”