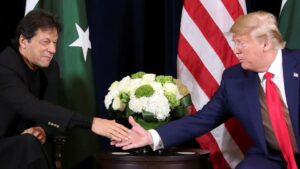 Pakistani Prime Minister Imran Khan said on Tuesday that US President Donald Trump had asked him to mediate with Iran to defuse tensions.

“Trump asked me that if we could de-escalate the situation and maybe come up with another deal,” Khan told reporters at the United Nations after meeting both Trump and Iranian President Hassan Rouhani.

“I can’t say anything right now more than this, except that we are trying and mediating.”

Iran said on Tuesday that a statement by Britain, France and Germany accusing it of responsibility for attacks on Saudi oil facilities showed that they lacked the will to confront US “bullying”, the semi-official Mehr news agency reported.

“These allegations, which lack evidence, are based solely on a ridiculous rationale that ‘there is no other possible explanation’,” Iran’s foreign ministry said in a statement.

Britain, France and Germany joined the United States on Monday in blaming Iran for attacks on key oil facilities in Saudi Arabia, but the Iranian foreign minister pointed to claims of responsibility by Yemeni rebels and said: “If Iran were behind this attack, nothing would have been left of this refinery.”

They pledged to try to ease tensions in the Middle East and urged Iran to “refrain from choosing provocation and escalation.”

British-flagged tanker Stena Impero, detained by Iran in July, remains in that country even as Iranian officials have said it was free to leave, Erik Hanell, chief executive of the tanker’s Swedish owner Stena Bulk said on Tuesday.

Iran’s ambassador to Britain, Hamid Baeidinejad, had said in a Twitter post on Monday that the vessel was free to leave after legal hurdles had been cleared.

“The detention order on Stena Impero had been lifted and the vessel is going through the proceedings to leave Bandar Abbas” port, Mohammad Rastad, head of Iran’s Ports and Maritime Organization, was quoted as saying on Tuesday by the semi-official news agency ILNA.

“She has moved during her time there to get fresh water, among other things, but is still in Bandar Abbas,” Hanell said in a text message, adding he had no information as to why the ship had not left Iran.