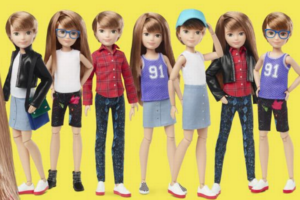 Toy manufacturer Mattel has launched a new line of dolls that are “gender inclusive” and “free of labels”.

The “Creatable World” kits come with clothing options, accessories and wigs to allow children to style the doll with short or long hair, or in a skirt, trousers or both.

Mattel said it worked alongside a “dedicated team of experts, parents, physicians and most importantly, kids” to create the six different kits in a variety of skin tones.

“Through research, we heard that kids don’t want their toys dictated by gender norms. This line allows all kids to express themselves freely which is why it resonates so strongly with them.

“We’re hopeful Creatable World will encourage people to think more broadly about how all kids can benefit from doll play.”

459 Replies to “Toy manufacturer Mattel has launched a new line of dolls that are “gender inclusive” and “free of labels”.”