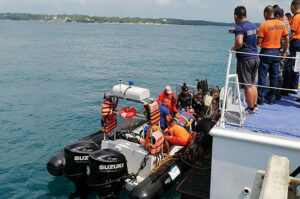 KALIBO, Philippines — The Philippines coast guard said seven rowers drowned and 14 others were rescued when their dragon boat overturned Wednesday after being lashed by strong waves during a practice run off a popular resort island.

Friends, supporters and fellow rowers expressed shock and offered prayers for the sudden deaths in the team’s Facebook account.

Survivors of the accident, including a Chinese and a Russian, were brought by coast guard personnel and authorities to a hospital, Balilo said. The boat capsized less than half a kilometer (a third of a mile) from the nearest beach.

There was no storm battering the region and government forecasters said light to moderate winds were expected Wednesday with generally calm seas, but weather in the region has been known to suddenly shift.

Dragon boat rowing using Chinese-style canoes adorned with dragon designs and manned by a team of paddlers and a drum beater on board have long been popular in the Philippines, with teams competing in domestic and Asian competitions.

Last month, 31 people died when their two ferries capsized in the Iloilo Strait after being suddenly buffeted by fierce waves and winds off Guimaras and Iloilo provinces, not far from Boracay.