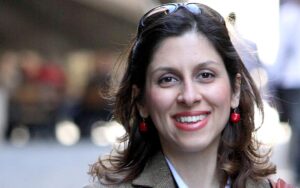 The Iranian foreign minister has claimed that the UK offered release £400m owed to Iran from a decades-old deal in return for Tehran freeing Nazanin Zaghari-Ratcliffe, the British-Iranian charity worker.

Mr Zarif said both Mr Hammond and Mr Johnson considered the idea but that it was nixed by Mr Hunt because he harboured ambitions to become prime minister and did not want to be seen to be paying a ransom to Iran.

Speaking at the UN General Assembly in New York, Javad Zarif said that both Philip Hammond and Boris Johnson were open to the proposal when they were foreign secretary but that it was taken off the table by Jeremy Hunt.

The idea involves the UK returning £400m which the Shah of Iran paid in the 1970s to purchase 1,750 tanks and armoured cars from Britain. The UK did not deliver the tanks after the Shah was overthrown and Iran has repeatedly demanded the money back.

He added that he had also discussed the proposal with Dominic Raab, the current foreign secretary, without reaching a conclusion.

“[Mr Raab raised it] and I told him that there was an offer from their side which unfortunately hasn’t been fulfilled. Basically he made a statement and I made a rebuttal and then we said goodbye.”

Richard Ratcliffe, Nazanin’s husband, told the Guardian he was glad that Mr Zarif had made the offer of an exchange of payments for his wife’s freedom so explicit. “I am glad that foreign minister Zarif has been so clear. Transparency has been a long time coming,” he said.

An international arbitration court ruled in 2009 that the UK must pay the money back but Britain’s own high court has yet to issue a ruling on the subject.

“We will highlight our concerns over innocent people being held in Iran without due judicial process at the UN this week.”

2,627 Replies to “The Iranian foreign minister has claimed that the UK offered release £400m owed to Iran from a decades-old deal in return for Tehran freeing Nazanin Zaghari-Ratcliffe”