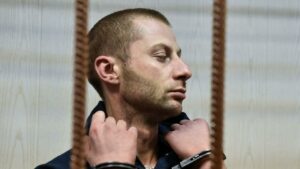 A Russian court on Wednesday sentenced a man who snatched a 19th-century painting off the wall in a busy Moscow gallery earlier this year to three years in a maximum security prison.

The court in the Russian capital found Denis Chuprikov guilty of theft of valuable items.

In January, Chuprikov took the painting off the wall in Moscow’s Tretyakov gallery — home to some of Russia’s most storied art — and strolled out past visitors and security.

He took a Crimean landscape by Russian artist Arkhip Kuindzhi and carried it through a room filled with visitors, CCTV cameras showed.

He then drove off with the oil painting but was arrested the next morning in a village outside Moscow.

Chuprikov admitted hiding the art work at a construction site from where it was recovered. He denied any wrongdoing at the time.

The painting, depicting the Ai-Petri mountain in Crimea, was completed between 1898 and 1908.

The security incident was the second to hit the gallery within a year, when a man slashed a painting by Ilya Repin depicting Tsar Ivan the Terrible after he killed his son.

308 Replies to “The court in the Russian capital found Denis Chuprikov guilty of theft of valuable items.”