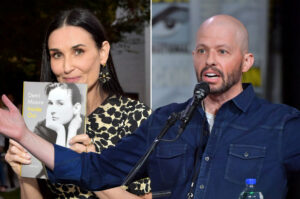 Jon Cryer doesn’t want Demi Moore to feel bad about taking his virginity — because she didn’t.

In her new memoir, “Inside Out,” Moore writes that she felt bad taking his virginity while filming their 1984 movie, “No Small Affair.”

However, it turns out Moore, 56, was not Cryer’s first.

“Well, the good thing about this is she doesn’t have to feel bad about it anymore, because while I’m sure she was totally justified making that assumption based on my skill level (and the stunned look on my face at the time), I had actually lost my virginity in high school,” Cryer, 54, tweeted in response on Tuesday afternoon.

“It pains me to think of how callous I was with his feelings — that I stole what could have been such an important and beautiful moment from him,” she writes.

He added, “But she’s right the other part, I was over the moon for her during a very troubled time in her life. I have nothing but affection for her and not a regret in the world.”

“Inside Out” went on sale Tuesday.

Moore, who was around 21 years old at the time, revealed she was dependent on cocaine during that time in her life and did some “self-destructive things during that period.”