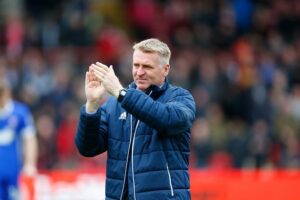 Dean Smith has hailed Brentford’s victory over QPR, calling it ‘payback’ for the result at Loftus Road earlier this season.

The Bees saw out the match to secure a 2-1 victory at Griffin Park this afternoon, and Smith was quick to praise the home fans for the part they played in the victory.

He said: “It was a fantastic atmosphere.

“The result today was just a reward for the fans who have been with us all season – even through the start of the season when we were playing well but not winning, and that’s payback for the supporters who were there at Loftus Road when we should have won.”

Brentford could have put the game to bed before half-time after a dominant display in the first 45, but a missed penalty from Ollie Watkins allowed Idrissa Sylla to get an equaliser against the run of play.

The Bees managed to get the three points with a late Florian Jozefzoon goal, and Smith was delighted that they managed to see the game out.

He said: “I thought we were excellent in the first half. We weren’t as good in the second half; we were a little bit sloppy and the game became a little bit niggly as well with a lot of stoppages.

“You go in at half-time and you’re disappointed at the fact that they scored with the only time that Dan (Bentley) had to make a save in the first half.

“We probably never got out quick enough from the original corner to close them down, but I was really pleased with how we played in the first half, and what we couldn’t do is go and feel sorry for ourselves.

“In the second half they dropped a lot deeper to try and frustrate us and hit us on the counter and we got a bit of magic from Florian who, similar to last week where the Fulham keeper tipped it over the bar, this week he’s passed it into the top corner.” 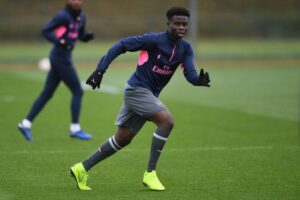 The Arsenal FC player generating a huge buzz as he makes his senior debut is an Ealing-born former Greenford High School pupil.

Arsenal believe they have a genuine star in the making in Saka and when he came off the bench during the second half of the Europa League win against Vorskla in Kiev last month he gave everyone watching a glimpse of his exceptional talent, football.london reports.

Where did it all begin for Saka?

Throughout his development, the winger played in age groups way above his own as Arsenal previously looked to fast track Saka, having first been spotted while playing for his local side – Greenford Celtic – aged just seven.

In Year 9 at Greenford High School, he was praised by his teachers for being selected for the England Youth national team – and scoring.

Even at a young age he had professional clubs queuing up to take him, but when Arsenal showed their hand there was nowhere else he was going to go.

What next for Bukayo Saka?

The player made his home debut for Arsenal on Thursday (December 13) against Qarabag at the Emirates. And he hopes to continue making high profile appearances.

He told football.london: “I hope to feature more and more for the Under-23s which is very good for my development.

“I feel I am now used to the pace and physicality.”

“I’ve played at the Emirates before in the FA Youth Cup but to play in front of as big crowd on a European night would be a great experience,” he said.

“I had invitations from Spurs, Chelsea, Fulham and Watford but the only choice was Arsenal,” said Saka.

“I enjoyed the way that Arsenal played so the choice was easy for me.

“I trained at Hale End and signed when I was nine years old. Receiving a scholarship and then signing a professional contract a couple of months ago and playing for the first-team has made this year very special already.” 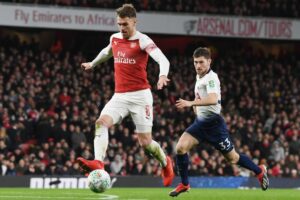 That’s according to Argentinian journalist Roberto Martinez who has tweeted that Ever Banega would like to leave Sevilla to be reunited with Unai Emery, the manager he feels understands his game best.

A move for the 30-year-old was widely rumoured in the summer as the new head coach at the Emirates got his feet under the table but failed to materialise.

Banega will be 31 in June but Arsenal signed a number of experienced players to enhance their squad in the summer, and the wily playmaker is both a sublime passer of the ball and a footballer who knows Emery’s methods inside and out, having enjoyed success playing for the Spaniard.

In the meantime, a contract offer for Aaron Ramsey has been rescinded while confusion reigns over Mesut Ozil’s status after the German has found himself in and out of the team and unable to make himself available for key fixtures.

Manchester United could be set to make a January move for West Ham defender Issa Diop – but he’ll cost more than £60 million.

The 21-year-old joined the Hammers from Toulouse in the summer, for a fee believed to be worth around £22 million.

He has made 19 appearances in all competitions this term.

Now the Daily Mail say United have scouted him – with a view to bring him to Old Trafford.

However, Hazard has already stated that he’ll be finishing the season with Chelsea, so this could be one for the summer transfer market.

Real Madrid look to be positioning themselves for a proper run at Chelsea star Eden Hazard – and according to reports they could offer two players to the Premier League side as part of a potential deal.

Mateo Kovacic is already on loan at Stamford Bridge, and according to El Espanol, Real will offer both him and their beleaguered star Isco in exchange for the Belgian.

Kovacic already seems settled in London, and earlier in December he admitted that he wouldn’t mind at all making the move to England permanent, while Isco has seemingly fallen out with manager Santiago Solari, and has been relegated to the bench amid hostility from Los Blancos’ fans.