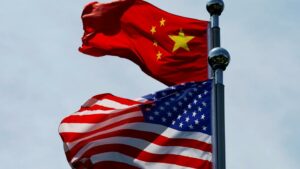 US president said a deal with China was getting closer just a day after he railed against Chinese “abuses” at the UNGA summit. Trump also said Washington and Tokyo had taken a major step towards sealing a comprehensive new trade deal.

Asian markets advanced Thursday after upbeat comments from US President Donald Trump that a trade deal with China could come sooner than expected and steps towards a new agreement with Japan.

In an appearance at the UN, Trump said a deal with China was getting closer, sending Wall Street higher despite concerns over the launch of an impeachment inquiry against the mercurial leader.

The remarks came just a day after Trump railed against Chinese “abuses” at the UN summit, comments that had been seen as among the factors causing stocks to fall Tuesday.

Trump on Wednesday also said Washington and Tokyo had taken a major step towards sealing a comprehensive new trade deal, which will see Japan cut tariffs on $7 billion in US farm exports, while the US would cut tariffs on some Japanese agricultural goods.

“Investors have been ‘trade war’ bearish for so long that any sliver of optimism is cheered,” Stephen Innes, Asia Pacific market strategist at AxiTrader, said in a note.

The Japanese deal also “suggests the president is open to an ‘interim’ trade deal, possibly signalling he is willing to negotiate one with China”, Innes said.

“Markets have been swayed by the president’s remarks every day … in the latest move, sentiment got a boost from the president’s positive remarks” on trade, said Makoto Sengoku, market analyst at Tokai Tokyo Research Institute.

“It eased worries for now that the spat would weigh on the global economy,” the analyst said.

Tokyo closed up 0.1 percent, with steelmakers and auto manufacturers climbing on the brighter outlook for US trade deals.

Hong Kong closed 0.4 percent higher in a late surge after Beijing said China had bought a “considerable” amount of US pork and soybeans, the latest sign of easing tensions between the world’s two biggest economies.

The announcement came too late for Shanghai, which ended down 0.9 percent with traders cautious ahead of a weeklong holiday.

Elsewhere, Sydney slipped 0.5 percent, while Seoul ended marginally higher and Singapore was flat. Jakarta was up more than one percent and Mumbai was 0.9 percent higher.

European markets were steady at the open, with London up 0.1 percent, Frankfurt flat and Paris down 0.1 percent.

Crude prices slipped after an unexpected rise in US inventory and a swift recovery in Saudi Arabia’s output following the September 14 attacks on its oil infrastructure.

On forex markets, the pound was little changed. The British currency had pulled back after it rallied on Tuesday on the belief that the odds of a no-deal Brexit had fallen.

“With the political outlook ahead of Brexit murkier than ever and an election seemingly inevitable, any good news is well and truly baked into GBP now,” said Jeffrey Halley, senior market analyst at OANDA.

“It will probably take a Brexit agreement signed and sealed to give it new upside momentum.”

5,969 Replies to “US president said a deal with China was getting closer just a day after he railed against Chinese “abuses” at the UNGA summit.”